We are living in the midst of the mindfulness awakening.  This movement is a direct backlash to the mindless practices of the 20th century. The food we consume and the institutions we support matter. Our food matters. The latter part of the 20th century was a time of greed and exploitation leading to factory farms, sweatshops, and the highly processed diet of the western diet. These practices have led to the suffering of the environment, animals, and humanity. When we harm the environment, we harm ourselves. When we cause suffering to animals, we cause suffering to ourselves. Everything is connected.

Family farms turned into factory farms, which brutally massacre and cause great suffering to chickens, cows, and pigs. These factory farms cause great suffering to the animals, the workers, and the environment. The sewage runoff contaminating freshwater rivers and lakes while killing thousands of fish. The factory farm workers are usually illegal immigrants who have to deal with psychological and physical damage from unethical working standards.

In the same time frame, we saw the rise of cheap material goods made in China, Indonesia, India, and Bangladesh. These sweatshops use unfair labor practices and cause suffering to their employees. The rise of cheap goods has led to the hoarding movement of 1990’s. The average American household has 300,000 items, most which find their way into landfills.

Organic locally run farms are popping up all over the country and companies like The Ocean Cleanup are devoted to cleaning up the environment. Movements like minimalism and plant-based diets are growing exponentially. We the consumers can change the future with our wallets and conscious. I have adopted a pescetarian diet with plans on going vegan in the near future. I support ethical clothing companies like Conscious Apparel. I buy Tom’s toothpaste and deodorant which doesn’t test their products on animals. I buy organic foods as much as possible. By changing your habits you are in fact changing the world. Knowledge isn’t powerful unless there is direct action. Once we have knowledge we have a choice on how we live our life.

“There is no difference between healing the planet and healing ourselves.”

From CEO’s to professional athletes, the practice of meditation is becoming more normalized in the United States. Meditation has also been extensively studied by neuroscientists who have found scientific proof that meditation can rewire the brain, making us more compassionate and loving people. Meditation isn’t going to make your life perfect. Think of it as a mental health exercise that can alleviate mental stress, anxiety, and depression. Adding it to a healthy diet and workout regiment for a healthy mind, body, and spirit. Our mind is like a puppy wandering towards every stimulus in the park, never truly focusing on the present moment. The goal of meditation isn’t to control our thoughts but to not allow our thoughts to control us.

In its most basic definition, meditation is allowing everything to exactly exist in its present state. Sounds easy right? It’s not, our mind loves wandering to the past, future, or how things should be but they are not. Meditation is about training the brain so you are not tormented by cravings, impulses, and the natural tendency for our mind to focus on the negative.

I discovered meditation when my ex-fiance and I broke up. My anxiety after the breakup was so bad that I was on the verge of a mental breakdown. My stomach was constantly in knots and my mind was in chaos. One day I researched the benefits of meditation and found out that it could help alleviate anxiety. After trial and error, I started meditating 10-60 minutes a day. I couldn’t believe how great I felt after my meditation. My anxiety & stress seemed to vanish and I felt more content with who I was in my entire life. Life has had its ups and downs since then but I can always find my peace while meditating. It helps me focus on the present, express gratitude, and show compassion to myself and others.

I invite you to try meditation for yourself. Find a meditation that works for you. Whether that’s a mindful walking meditation or sitting on a chair/cushion. The first step is to focus on your breath, which will center your body and mind. Whenever your mind wanders, you can bring it back to the present moment by focusing on the breath. With the power of Youtube, Google, and all the different applications like Calm or Headspace you can find your own path of meditation that works for you. Just remember, meditation won’t always be pleasurable just like working out or eating healthy isn’t always enjoyable. The benefits of meditation our felt when leaving the cushion. The benefits of compassion, love, forgiveness, and focus. 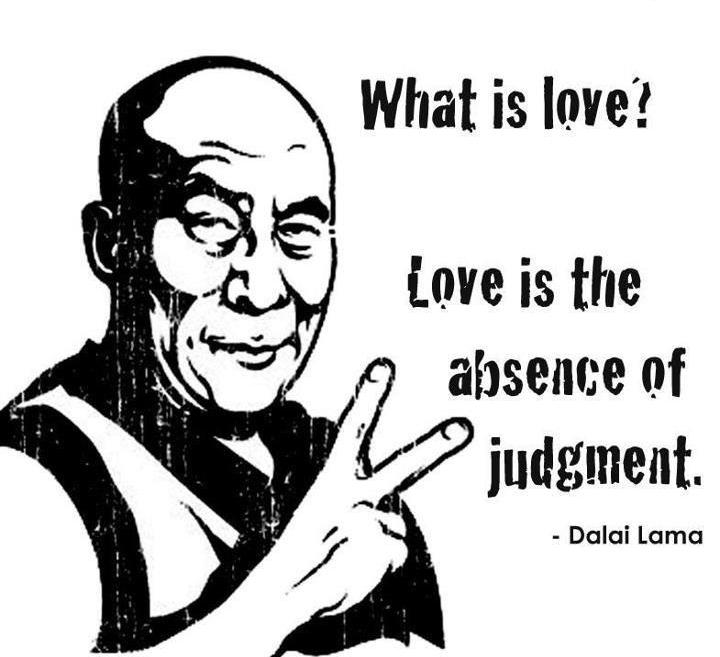 Love does not judge.

Love is not obsessed, attached, or needing of monetary reward.

Love does not keep score.

Love is freeing and open.

Love is all you need.

“Love in such a way that the person you love feels free.”